Sweet Potato Pie really shines this time of the year. My version of this delicious Holiday dessert will have you go back for seconds. Here is my recipe on how to make a Mascarpone Bourbon Roasted Sweet Potato Pie.

If you like this pie you will want to check my Apple Cider Spice Cake, find the recipe here.

Origins of the Sweet Potato Pie.

A staple in the Southern and Black cuisine since colonial times, it is considered by some the heart of Soul Food. The use of sweet potato traces back to West African influences.

Sweet Potato which is native to the Americas was used by enslaved Africans in lieu of yams (found in their homeland). They were not fans of sweet potato, therefore having only access to cassava and other root vegetables they would use them instead.

In the 18th century Sweet Potato pie recipes started appearing in cookbooks but they were considered savory. It wasn’t until the 19th century that it was considered a dessert.

Sweet Potato consists of basic ingredients of milk, sugar eggs, and pie crust. Usually a spirit is added like Brandy or Bourbon.

In Puerto Rico we call them Batata from the same indigenous Taino word. We often use it in savory dishes like viandas con bacalao’ (root vegetable with salted cod salad). It consist of yucca, potatoes, batata, yam (white), malanga(taro root), green bananas and plantains. Boiled then seasoned with spices, onions, olive oil and mix it with cooked flaked salted cod. Perfection! We also use it for Sancocho, (a root vegetable stew).

How to make this Mascarpone Bourbon Roasted Sweet Potato Pie

This pie comes together quickly, however there are some steps that you want to follow in order to have a successful pie. Here is what you will need:

Sweet Potatoes – I usually get Organic Sweet Potatoes. I prefer roasting the sweet potatoes instead of getting canned yams (but you do you!). Roast them potatoes for 1.5 hrs at 400 degrees in the oven then scoop them out in a bowl.

Mascarpone – This is my secret ingredient – well not so secret! I use Trader Joe’s brand. Mascarpone cheese is an Italian cheese made of cream and it kinda resembles cream cheese. Love the flavor of mascarpone as opposed to cream cheese. It’s creamy and gives the pie a velvety texture. Just like cream cheese you want to bring it to room temp before adding to the mix.

Bourbon – Four Roses Bourbon is my favorite. Its distinctive flavor gives the pie an kick but it is not mandatory that you add a spirit. You can always omit.

Sugar – I don’t like overly sweet desserts. I discovered Lakanto Monkfruit Sweetener and that is all I use in my recipes. It’s a great sugar substitute without the after taste that many substitute sweeteners tend to have. For this recipe, I used their Gold Brown Sugar.

Milk – My recipe is tested with whole milk, but any other milk would work. Keep in mind that when you exchange an ingredient that the original recipe calls for, you might end up with a slightly different result.

Heavy Cream – I use heavy cream instead of sweetened condensed milk. This combined with the mascarpone cheese gives the pie its thick and creamy consistency.

Butter – I used Tillamook’s Unsalted butter because it’s made of real cream. Simple ingredients. It also great for baking.

Eggs – I used Eggsland’s best large eggs. As always you can use whatever you have on hand.

Vanilla – I love Molina Vanilla but you can use Paste, pure, anything you have on hand!

Pie Crust – Listen! You can always make your own crust. There are so many wonderful recipes out there. But for this recipe and my own convenience, I used Winco’s brand pie crust, which I was very pleased with its flakiness and the taste.

Let’s put this pie together:

Whisk the eggs and sugar into a bowl until the sugar have dissolved.

Melt the butter in a small sauce pan, set aside to cool off.

Whisk in the potato puree, cheese, milk, and heavy cream into the egg + sugar mixture.

Transfer the crust and trim excess into a pie pan. Using a cookie cutter you can make leaf shapes or any shapes you’d like to decorate the pie.

Slightly beat one egg and brush the crust and leaves and sprinkle with sugar. Pour mixture into pan. ( you might have leftover mixture- you can use later for the base to pancakes or waffles).

Place the pie pan in a baking sheet – in case of spillage, it won’t spill all over your oven rack – and bake at 350 degrees for 45 minutes.

Remove from oven and cool off for about 30 minutes before refrigerating for at least 4 hours before serving. You can serve with whipped cream.

There you have it, you just made pie. So next holiday gathering you can impress the Fam with this fantastic pie.

You can pin this for later on Pinterest. You can also find me here on Instagram where I share my How-to videos! If you make this, don’t forget to tag me @hungrytravelingmama 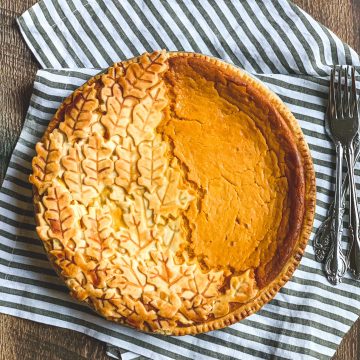 How to make a Mascarpone Bourbon Roasted Sweet Potato Pie.

Keyword Christmas Deserts, Dessers with Bourbon, Desserts with Mascaropne, holiday desserts, Sweet Potato Pie
Did you make this recipe?Tag @cafesazonyvida on Instagram and use #cafesazonyvida!
« How to Make the Best Coquito – Puerto Rican Nog
Simply Baked Salmon with Couscous and Pineapple Vinaigrette »