Sofrito or Recaito is the most important ingredient and the base in our Cuisine. Here I will show you how to make Puerto Rican Sofrito – recaito.

Growing up in Puerto Rico, Sofrito was the base in our Puerto Rican cooking. I remember going to La Plaza del Mercado or the market to buy a whole dollar worth of vegetables, herbs and spices. My mom then would make it and use it in stews, seafood and our famous Lechon/Pernil!

Most people don’t know is that Sofrito originated in a 1324 Catalan cookbook called Libre de Sent Sovi. The word Sofregit means lightly fry or sautéed. The Spaniards brought it to the Caribbean and Latin American during Colonization.

Honestly, there’s many ways to make Sofrito. In Puerto Rico we call Recaito because of the use of red and green peppers, cilantro, garlic, yellow onions, and culantro (means little cilantro) which gives it the aromatic and distinctive flavor.

I use Sofrito in almost all my savory recipes like in the Chorizo, Egg and Potato Hash, Cuban sandwich with Mojo Roasted Pork, and Meat and Potato Empanadillas.

Culantro, where can I find it?

Culantro is cilantro baby cousin but with strong flavor. Sometimes I have a hard time finding it because it is sorta a specialty herb. Latin Markets that sell Puerto Rican or Caribbean foods might carry it.

Where I usually I find it is at Hmart, it goes by the name ngò gai. Other names include long coriander, Chinese coriander or as Coolante in Haiti which it’s used to make Epis.

Although it is used for culinary purposes it can be used for medical properties like an anti inflammatory or pain reliever.

Living in the PNW poses some serious challenges when it comes to finding a lot of products, herbs and veggies, etc. Sofrito consists of:

Some people use different variations to make Sofrito, in the Dominican Republic vinegar, tomatoes and ham are added.

Alright, making this Puerto Rican Sofrito – Recaito at home it is super easy. Lets get to it:

To start wash and pad dry all your herbs and veggies. Next, roughly chop the peppers, onions, and cilantro. Set aside on a bowl. After that, peel the garlic cloves and add to your pile.

Lastly, in a blender or food processor add peppers, cilantro, culantro, onions, garlic, salt + pepper and a ¼ cup of water(only at the beginning). I do this in batches to make sure everything ends up pureed and there aren’t any big chunks.

In the end, it should look like the picture above. It is ready to store.

Have you tried making Sofrito? What is your favorite food to use it with? Let me know in the comments!!! 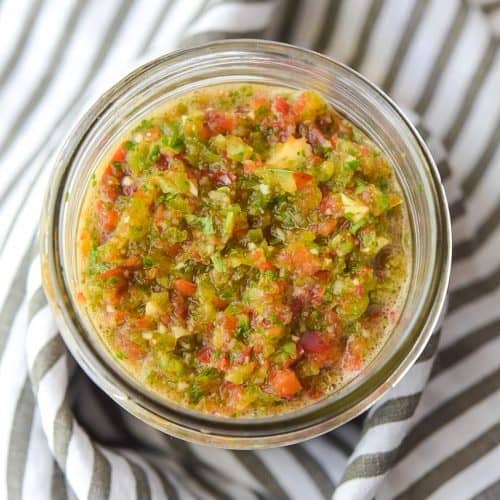