I am definitely a brunch person. A savory brunch person. But I have a soft spot for French Toast. This Easy Challah Mascarpone Blueberry French Toast casserole it is super easy and it can be prepared ahead of time and all you have to do is pop it in the oven in the morning!

Imagine waking up to the smell of cinnamon and sweet warm bread. This is exactly how this French Toast Casserole will make you feel.

The earliest known reference to French toast is in the Apicius, a collection of Latin recipes dating to the 4th or 5th century, where it is described as simply aliter dulcia in other words, “another sweet dish”. The recipe says to “break slice fine white bread, crust removed, into rather large pieces which soak in milk and beaten eggs fry in oil, cover with honey and serve.”

The usual French name is pain perdu , “lost bread”, reflecting its use of stale or otherwise “lost” bread — which gave birth to the metaphoric term pain perdu for sunk costs. It may also be called pain doré, “golden bread”, in Canada.There are fifteenth-century English recipes for pain perdu.

One of my favorite versions from  New Orleans Louisiana Creole cuisine, French toast is known as pain perdu and is most commonly served as a breakfast dish. The recipe calls for New Orleans-style French bread; the batter is an egg-based custard that may include spirits. Common toppings include cane syrup, strongly flavored honey, or fruit syrups; a dusting of powdered sugar is also traditional.*

First and foremost, lets talk about the Star of the dish: Challah Bread. Traditionally, challah is defined as any bread that is made for use in Jewish ritual. During the first few thousand years of Jewish life, challah included everything from rich layered breads baked overnight in Yemen, pita pockets in Syria and lepeshka flatbread in the Caucasus. Later on, as challah traveled with the Jews, the bread took on a Hungarian costume of poppy seeds, soaked up orange blossom water in Libya, and mixed with pumpkin in Spain.

In the Ashkenazi world — that of the Jews who made their way over time to Central and Eastern Europe — challah evolved into the fluffy, egg-enriched, sugar-laced, six-stranded braid that we recognize. (Source: NY Times: A Twist on the Traditional Challah)

For this recipe I will be using Trader Joes Braided Challah Style Bread. You can find it at your local TJ’s for $3.99.

For this recipe I dried the bread in the refrigerator for a few days. The reason for this is so the bread can soak up all the flavor. I cut the bread into 1 inch cubes. Mixed eggs, milk, vanilla, cinnamon and sugar. Then add the secret ingredient: Four Roses Bourbon. I mean it can’t get any better than that!

Note that I am using Lakanto Sweetner for the base and also Lakanto Powedered sugar for dusting. This is a monk fruit sweetener usually used in Low Carb cooking and baking. It is one of my favorite brands because it doesn’t have an aftertaste and to be honest you really can’t tell the difference. Therefore, reducing the sugar and calories in the dish.

Cook it in the oven covered at 350 degrees for 30 mins. Then Cook uncovered for another 20 mins or until a toothpick comes out clean. Remove from the oven and let it rest for about 10 minutes. Then Dig in!

I serve it with whipped cream or crème fraîche . It also pairs well with Chicory coffee or just a plain cup of Joe. In conclusion your breakfast doesn’t have to be boring and this recipe its super easy to make. Enjoy!

Don’t forget to pin this recipe for later on Pinterest. 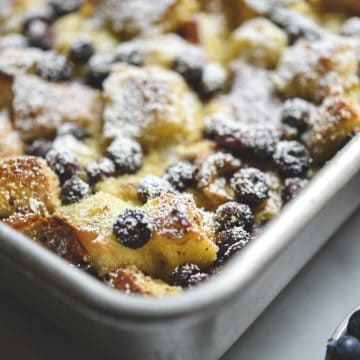 *Source: Wikipedia And Culinary Institute of the Americas