The holiday season is finally upon us. That also means is Coquito season. Coquito is a creamy boozy drink that Puerto Ricans make for Christmas. Here is my recipe on How to make the best Coquito – Puerto Rican Nog.

You can get my Puerto Rican Adobo recipe here .

It means “Little Coconut” in Spanish.

Coquito is a creamy coconut-y boozy creamy drink that it originated in Puerto Rico and we drink during the holidays.

We start making Coquito as Early as November and drink all the way through Three King’s Day in January 6.

Before I continue, let me get this out of the way: Coquito is NOT egg nog. Nor it does contains eggs. That’s a total different drink called ponche and once again you don’t put eggs on Coquito.

There’s debate as to how Coquito originated. One is that it is literally unknown who and how the recipe started.

The other theory is that during Colonization, the Spaniards brought the drink to the island. Taking a spin on the Spanish “Eggnog” adding a Spirit therefore ending up with Coquito.

Maybe the real story is that a Taíno or an African created the OG recipe and the Spaniards wanted to take credit for it as colonizers have been known to do.

It is said that Puerto Ricans added the coconut milk to the original recipe. So In resume no one really know for certain where the recipe came from.

How to make the best Coquito?

We have been making Coquito in my family for decades. My Granpa used to make the Pitorro – Puerto Rican Moonshine – a strong, high-proof, raw spirit usually made from  molasses or sugarcane – in the summer so it’d be ready for the holidays. Being that Pitorro is *ahem* illegal to make, (I know there are some commercial Pitorro BUT it is not the same) we make variations of the drink with Rum since my Granpa passed away in the 90’s.

The main ingredients are: Coconut Milk, Coconut Cream, Sweetened Condensed Milk and Rum. In the past making Coquito was an act of love. You’d had to make your own coconut milk. Nowadays, we benefit from the convenience of canned coconut milk.

Through out the years families have adapted and created their own recipes, but in essence we all make it with the same foundation ingredients.

This recipe comes together easy but there are steps that you should not skip to make a successful batch of Coquito.

The longer you let the drink sit on the refrigerator the better it becomes.

Here is what you need to make the best Coquito:

Coconut Cream – I don’t like overly sweet coquito, so I use unsweetened coconut cream, makes it creamy.

Sweetened Condensed Milk – You are getting all the sweetness from the condensed milk. It contains all the sugar you’ll need.

Rum – You will need two types of rum: White and Dark. I use the Don Q rums, they are my favorite and the flavor is on point as to how coquito should taste. The dark rum will give it a warm taste and that’s what makes it so good!

Additional Liqueur – I have made different flavors of Coquito like Nutella, Pistachio, Pumpkin Spice, Amaretto, and with Hazelnut Liquor. Frangelico is an Italian Hazelnut Liqueur made with hazelnuts found on Piedmont and they are combined with coffee, vanilla and cocoa distillates and extracts for a sweet yet balanced golden essence.

Blender – so you will need a good blender to make sure that everything get mix evenly.

Funnel + Strainer – this is very important in the process so you will need a medium size funnel and small strainer.

In the blender add the coconut milk, coconut cream, rums, liqueur, vanilla and spices. Blend until everything comes together.

Place the funnel and strainer in the opening of one of the bottles. Pour Coquito mixture. Repeat about 4 to 5 times, discarding the fat from the strainer every time. This will give you a smooth Coquito.

Put it in the refrigerator for at least a day before drinking. Coquito settles and separates due to the fat content in the milk and cream, so before pouring, poke it with a straw close it and shake vigorously so everything is combined thoroughly.

The longer is stays in the refrigerator the better it gets. Now go pour some. Sprinkle more cinnamon, nutmeg and garnish with star anise and cinnamon clove.

There you have it, how to make the best Coquito – Puerto Rican Nog! Want to save it to make later. Pin it on Pinterest. You can also Find me on Instagram where I share the How to do videos! 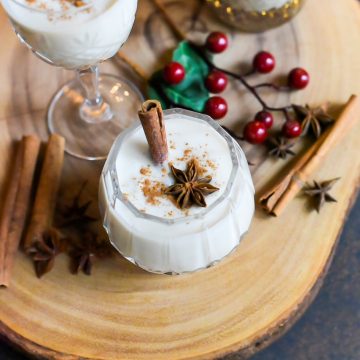 How to Make the Best Coquito – Puerto Rican Nog.