Lately, I have been on a quest for Vegan/Vegetarian recipe ideas. Recently, I discovered Oyster Mushrooms! These are a fantastic substitution for meat or seafood. Here is a quick and easy recipe for Vegan "Fish" Oyster Mushroom Tacos! These tacos pairs well with my Blood Orange Margarita!!

10 years ago I went full Vegan. I, a pork and carne frita, mofongo with Shrimp and lobster loving Puertorican went Vegan. Also, ten years ago there wasn't many Vegan options that didn't taste like a shoe. So, I did stick to making a lot of dishes at home from scratch and trying to find a substitute for meat, pork or seafood but it was difficult. The availability and variety of foods was limited. In spite of all that I thrived, was having fun with it but then I got tired.

I made it a year. During that time I was feeling really good and was happy with my Vegan Eats. That was a personal win. I probably could have gone longer, I just missed a lot Puertorican food cooked the OG way.

About a year ago I started incorporating more Vegan/Vegetarian Recipes into our meals. I started researching more Vegan/Vegetarian substitutes and I was surprised that a lot has changed since my year stint at being Vegan. One of my favorite vegetables are Mushrooms. For example Portobellos are a great substitute for meat/chicken when making a stew or using the whole cap to make burgers. Enoki mushrooms are mild but with a crunch, that can be eaten raw or cooked in soups, salads and sandwiches. So I was pleasantly surprised when I was introduced to Oyster Mushrooms.

What are Oyster Mushrooms?

Let's talk about the main ingredient in this recipe: Oyster Mushrooms. Also known as Pleurotus ostreatus, the pearl oyster mushroom or tree oyster mushroom, they are one of the most widely consumed mushrooms in the world.  It was first cultivated in Germany as a subsistence measure during World War I and is now grown commercially around the world for food. It is related to the similarly cultivated king oyster mushroom.

They get their name from their oyster-shaped cap and very short (or completely absent) stem. They're also similar to the color of raw oysters. These mushrooms are found in tropical and temperate climates. These fungi are cultivated all year round so they are easy to find. I usually buy them at Hmart or Paldo World Market.

Oyster Mushrooms are delicate and have a chewy like somewhat oyster texture (hence the name). When cooked they have a Shellfish like taste. Some have said that it has a slight anise or earthy flavor. The flavor profile is mild and it is great for cooking!

The oyster mushroom is frequently used in Japanese, Korean and Chinese cuisine as a delicacy. It is commonly served on its own, in soups, stuffed, or in stir-fry recipes with soy sauce. Oyster mushrooms are sometimes made into a sauce, used in Asian cooking, which is similar to oyster sauce.

Sometimes very large caps with flesh more than 1 inch thick are found. These can be cut into large pieces, dipped into slightly beaten eggs, and then rolled in bread crumbs for pan-frying, giving you the faux chicken or fried fish feel.

Cleaning and Preparing the Oyster Mushrooms

First, wash and pat dry. Cut the bottom stems and save for broth or discard. Cut them caps in slices or leave them whole if you prefer. For this recipe I am using a pound of Oyster Mushrooms and I have sliced them. Add juice from half a lemon and add ½ tbsp of Sazón, find recipe here. Add 1 Tbsp Coconut Aminos (I use the Trader Joe's Brand). Cook for about 5-7 minutes. Set aside.

Heat and crisp the Tortillas with a secret ingredient

To make this a true Vegan meal I had to make sure that all the ingredients had zero animal derivatives. I used corn tortillas and to heat the tortilla I used Country Crock Plant Based Butter with olive oil, which surprisingly was very good and it is gluten free. This butter can also be used for baking, sauteing and pan frying.

You can't have tacos without salsa or crema. They go together. These are supposed to be Vegan "fish" Oyster Mushroom tacos so to make sure the whole meal stays truly vegan, I used Forager Vegan yogurt made of Cashew's milk.

In a blender add ⅓ cup of yogurt, ⅓ cup of cilantro, juice from a lime, half a jalapeño (I like to roast it a pan to bring out the flavor) and salt and pepper. Blend until smooth and creamy.

I serve them with a quick purple cabbage slaw, mixing 1 cups of shredded purple cabbage, 1 tbsp of sesame oil + ½ tsp Rice vinegar and 1 Tbsp of Furikake. Mix and set aside.

Grab a tortilla fill with Oyster Mushroom Mixture, cole slaw, top with sauce and cilantro. Squeeze some lime and Enjoy!

These are super simple to make! What is your favorite Vegan Dish to make?

If you want to make this recipe later, don't forget to pin it on Pinterest. You can also follow my stories on my Instagram there I share the how to's and where all the fun happens.

Did you make this recipe? Tag me on Instagram #hungytravelingmama 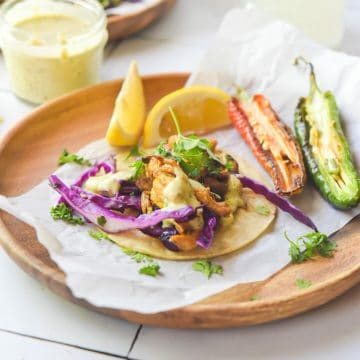 For the Oyster Mushroom

Keyword Oyster Mushrooms, Steak Tacos, Vegan Recipes, Vegan Tacos
Did you make this recipe?Tag @cafesazonyvida on Instagram and use #cafesazonyvida!